As part of the school games today, year 3 and 4 cricket squad (namely 10) was a formidable force at the Oasis Hobmore (Hosts).  Out of the 5 schools, Al -Furqaan came 3rd with just missing out on a 2nd place by a few runs!  Every player contributed to winning the game and their names deserves to be mentioned.  Here they are: 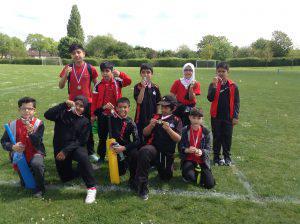